Hi Friends!  The last time I posted was six months ago!  Wow, so much has happened in the last six month but this post will tell the story of the Civil War Ball that Natasha and Mikayla got to attend with some dear friends of ours.  It was such a fun evening and such a wonderful expereince.

This Civil War Ball was started many years ago by a homeschool dad to give his teenagers an evening something like prom.  However, he didn’t really want to mimic a public school prom as they aren’t really a wholesome event… more like a cesspool of temptation to throw our teenagers.  So, he came up with the idea of Civil War Ball.  He rents out the Douglas County Fairgrounds for the entire day.  Those that register can come in the morning for dance lessons to learn period dances from that era.  Then the kids have several hours to have fun before the dance begins in the evening.  He has arranged for a handful of costume providers to be on site to rent period dresses and soldier/gentleman attire.  Many families make their own dresses and we were blessed to borrow a dress for Natasha from friends who go every year and had several extra dresses to choose from.  Mikayla’s dress was a former Elvish dress (think Lord of the Rings) that she altered a bit to fit the era.

Unfortunately, there are typically more young ladies that attend then young men so sometimes they have to dance a step or two with another gal but it’s all so much fun!  My girls had a wonderful time and are already planning for next year!  The parents can even join in on the fun with costumes and dancing! 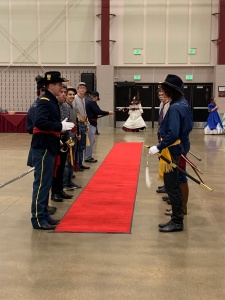 The young men line up and the girls are announced as they enter the ball.

This beautiful dress was made by family friends. 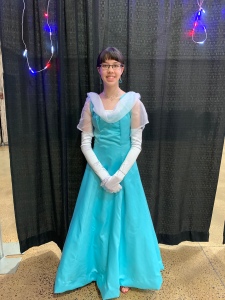 The blue beauty was also made by family friends – the dress that is!

Hopefully, later this week I can fill you in on all the changes for the Wilson family!

"The LORD will fulfill His purpose for me; Your steadfast love, O LORD, endures forever. Do not forsake the work of Your hands." Psalm 138:8

A look at 3 lives and what shapes our beliefs

Your celiac travel resource: helping you travel the world while living gluten-free

Inspiration For Learning and Life.

All She Has to Say

... About Living Humbly and Loving Well